My PhD dissertation (“candidate”) was devoted mostly to the prediction of thermal stability of some liquid crystals (nematic Schiff bases), or, more precisely, the temperature of mesophase destruction (the temperature at which a liquid crystal becomes a regular liquid). The results were published in [1-5]. Several other tasks appeared within this work.
Approximately 50 compounds (Schiff bases) were investigated, e.g., those shown below: 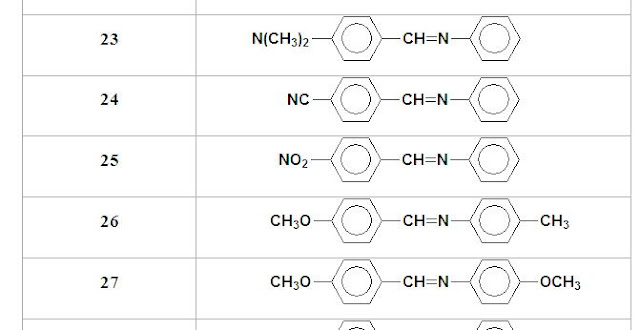 First, we computed NMR spectra of some of these molecules, and built a correlation between these computed NMR chemical shifts and experiment: 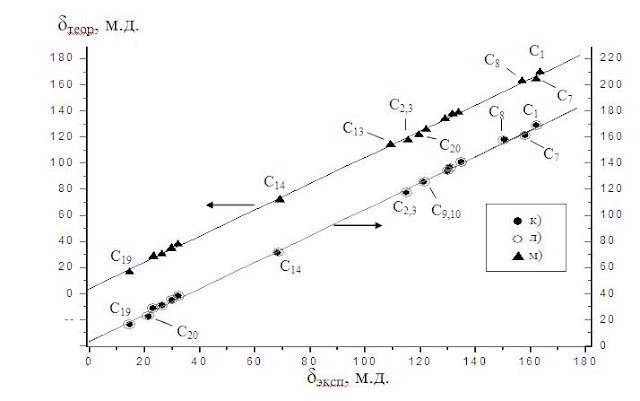 The computations were performed using the GIAO B3LYP/6-311G(D,P) method. B3LYP/6-311++G(2DF,PD) yielded somewhat better agreement with experiment but this level of theory was too expensive for us. The GIAO and CSGT algorithms yielded almost identical results (the difference was much smaller than other sources of error).
For molecule 1 (see above) the crystallography data is available. We did the following: the NMR chemical shifts for this molecule were computed not only with the optimized structure, but also with the structure taken from the crystallographic data (the bond lengths C..H were taken from the computation, since the crystallography does not provide the coordinates of H atoms in molecule). The agreement (correlation) between the computed and experimental chemical shifts appears to be much better in the first case; it means that the optimized structure (which corresponds to the gas phase) is closer to the real structure in liquid state than the crystal structure (in other words, the computational error is much smaller than the impact of the packing forces in crystal).
We found that the NMR spectra can be used for getting some information about the structure of the investigated molecules. At the same time, we found that the structural parameters of these molecules are much less important for our tasks than anticipated by previous researchers.
The molecular polarizability of a number of Schiff bases was computed. For some of these molecules the experimental polarizability data is available, and we found a good correlation between the computed and experimental components of the polarizability tenzor: 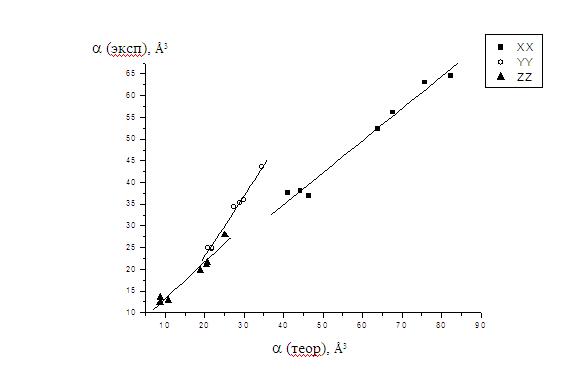 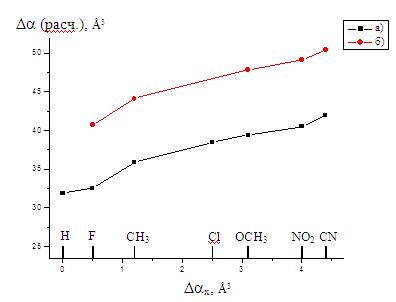 Then we plotted a correlation between the anisotropy of molecular polarizability of our Schiff bases (computed with DFT) and the experimental temperature of liquid crystal phase destruction (nematic-isotropic phase transition): 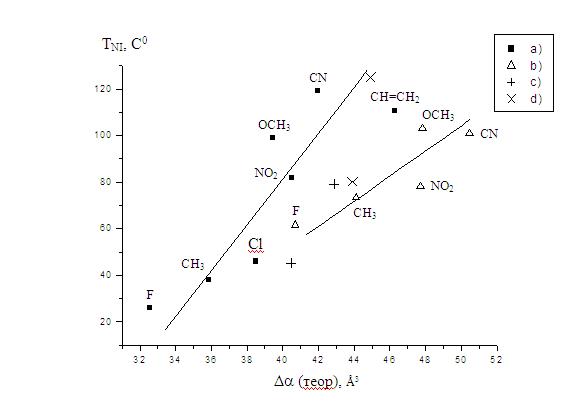 This “correlation” is quite low. Anyway, it can be stated that the anisotropy of molecular polarizability of nematic liquid crystals can be used for predicting their thermal stability. It seems evident that the low degree of correlation is not caused by the computational error (the picture above proves that this error is much smaller).