Correlations between computed and experimental properties

When the results of quantum chemistry computations are directly compared with experiment, often quite poor agreement is obtained. However, this agreement often becomes much better, if a series of homologues is taken and a correlation is built between the computed and experimental values. Here I present some samples of such correlations:

1)      Correlation between QC (T1(1)) and experimental heat of formation for a set of 1800 diverse organic molecules from NIST thermochemical database (from Wikipedia): 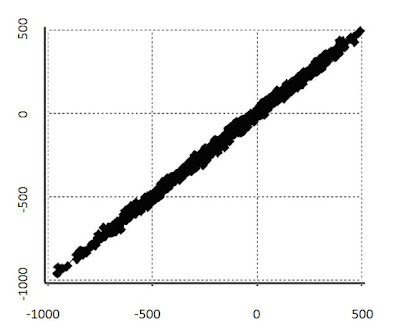 The mean absolute and RMS errors are 8.5 and 11.5 kJ/mol, respectively. 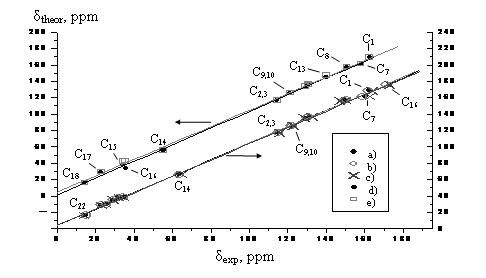 The calculations were performed with B3LYP/6-311G(D,P) method, but the B3LYP functional is considered obsolete at the moment. You should better use PBE, wB97XD or B3LYP-D3 instead. 6-311 G is not a good basis set too, you should better use, e.g., cc-pVDZ.

b) A bodipy molecule: 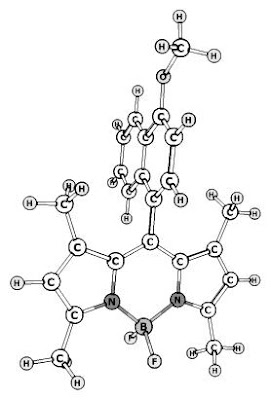 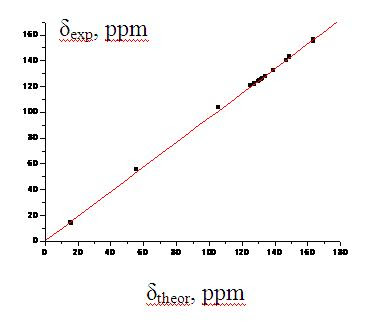 A similar correlation can be obtained for H1 chemical shifts (several bodipy molecules): 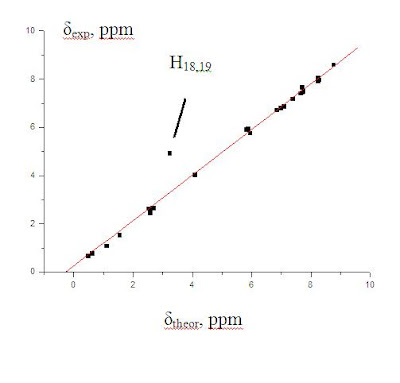 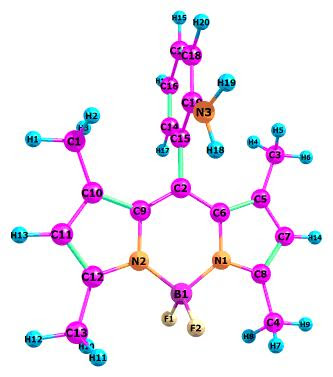 c) One more correlation from this site:

3) An important correlation can be obtained between computed energies, or maybe Gibbs energies, and experimental reaction constants.

a) Here is one such correlation for a set of 9 carboxylic acids: 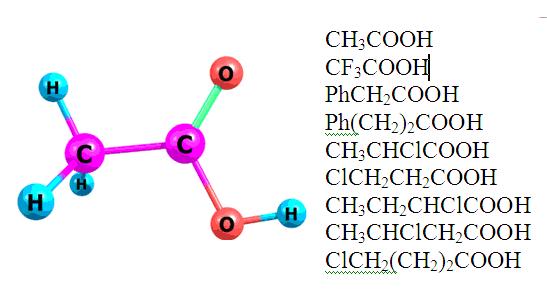 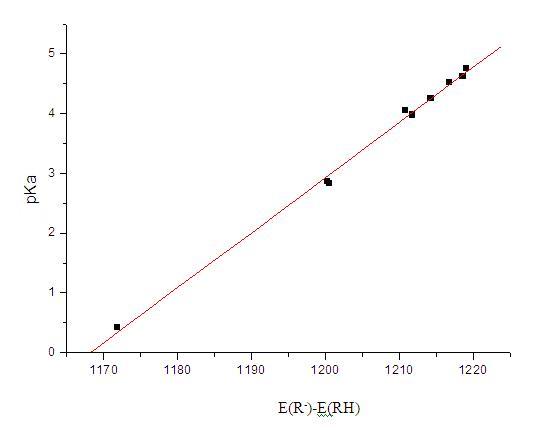 The energies were computed at PCM wB97XD/6-311++G(DP) level (the solvent is water), with two water molecules added to the model for taking into account the specific solvation.

within a row of homologues is relatively small, so

b) Some more correlations between the energy and PKa for 5 sets of compounds, taken from paper [1]: 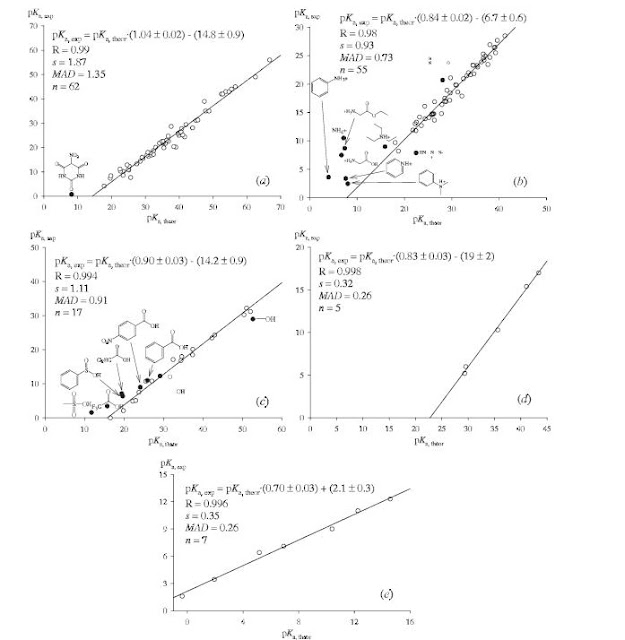 The theoretical constants were calculated from the Gibbs energies of deprotonation computed at PCM B3LYP/6-311+G(d,p) level (the solvent was DMSO). 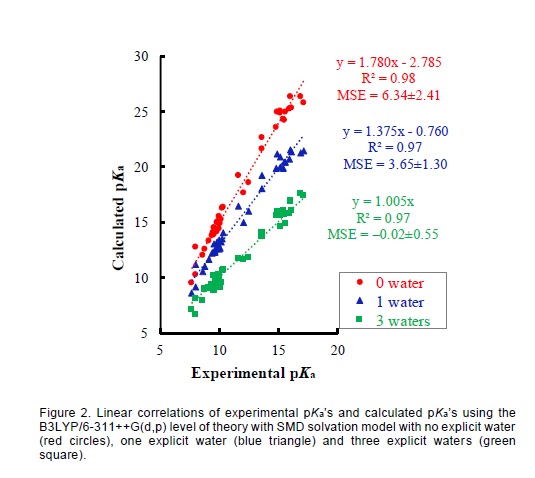 4) A similar correlation can be obtained between the computed energies and experimental rate constants. Here are some samples from our work:
a)
We have studied the reaction of C-Cl bond elimination of some anion radicals: 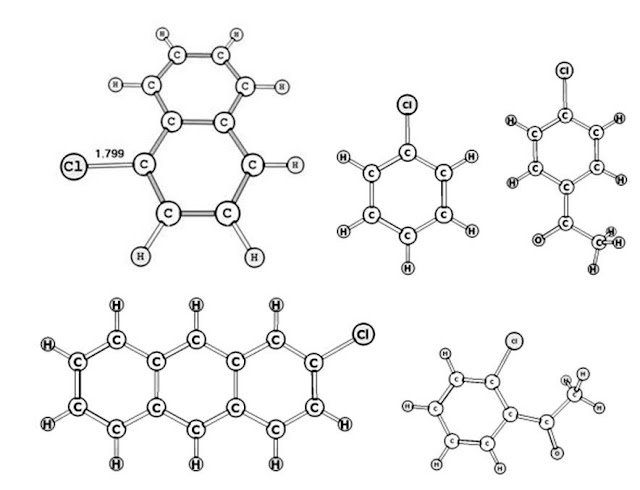 ....
The computed energies of the C-Cl bonds correlate with the experimental rate constants of the bond elimination reaction: 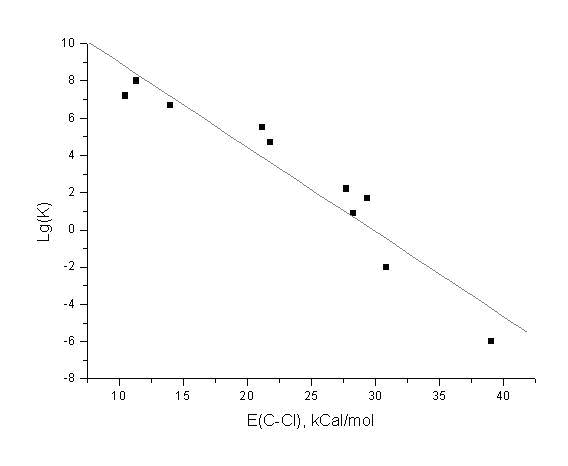 b)
We have studied the reaction of substitution of alcohol ligands by imidazole using QC and experimental methods: 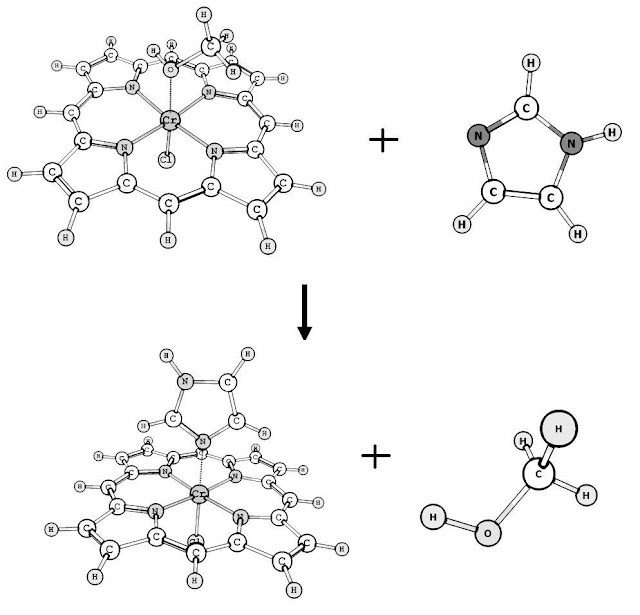 Apart from methanol, the data for other alcohols were also obtained:

The alcohol substitution was studied using electronic spectra. The experiment showed that this reaction has two stages, each stage having its own rate constant. Then I computed the energies Cr-Alcohol, and plotted the graph “Computed energies vs. experimental constants of correlation (first stage)”: 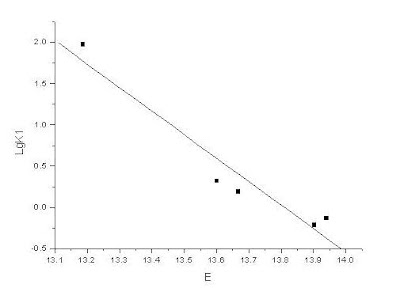 Note that in both cases no solvation modeling was used; this means that if we investigate the tendency within a series of homologues, the accuracy of a simple quantum chemistry computation (gas phase modeling) is sufficient to make important conclusions.

5) We have found a correlation between the computed and experimental components of polarizability tensor for some Shiff bases: 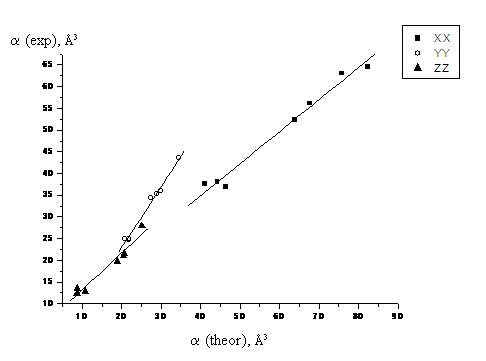 6) For computation of electronic spectra using the TDDFT method, the correlation seems to be worse:
a) [2]: 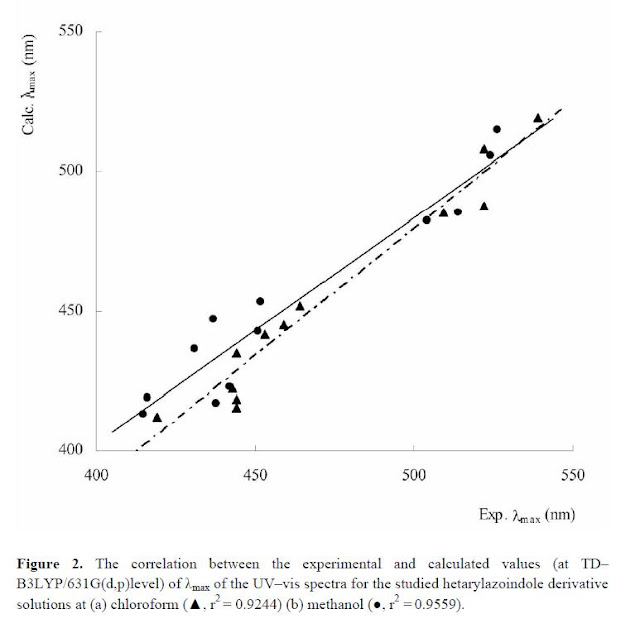 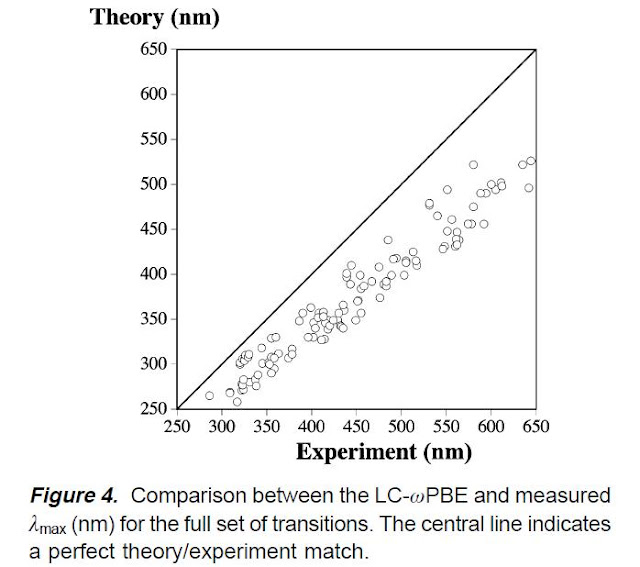 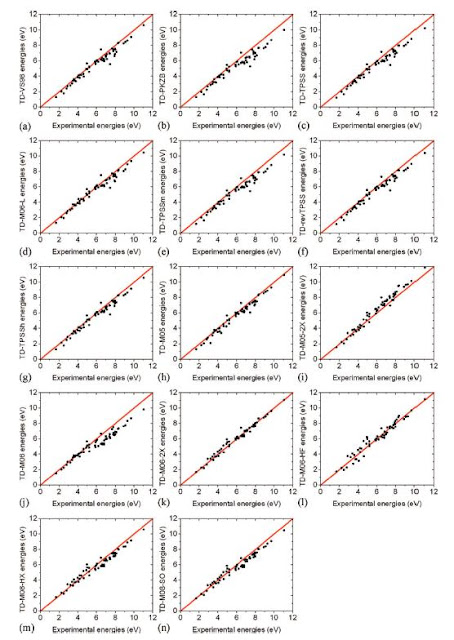 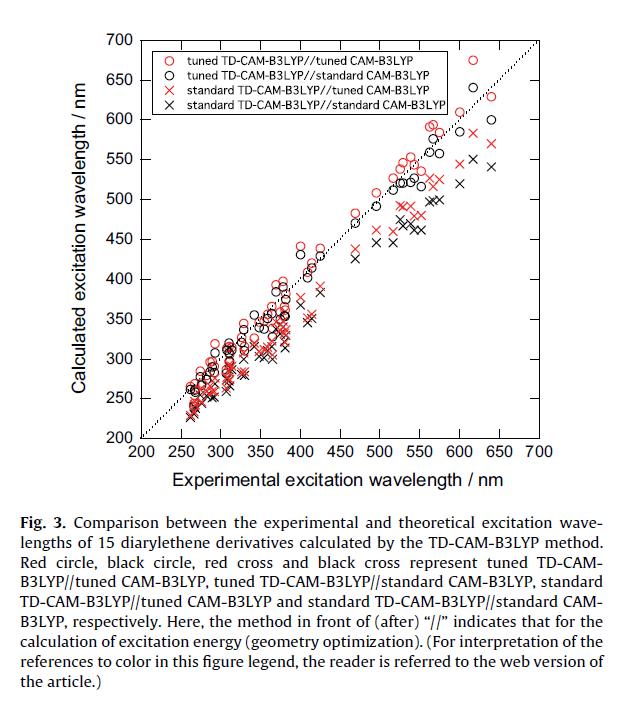 f) For some Bodipy molecules, the correlation seems to be better [9]: 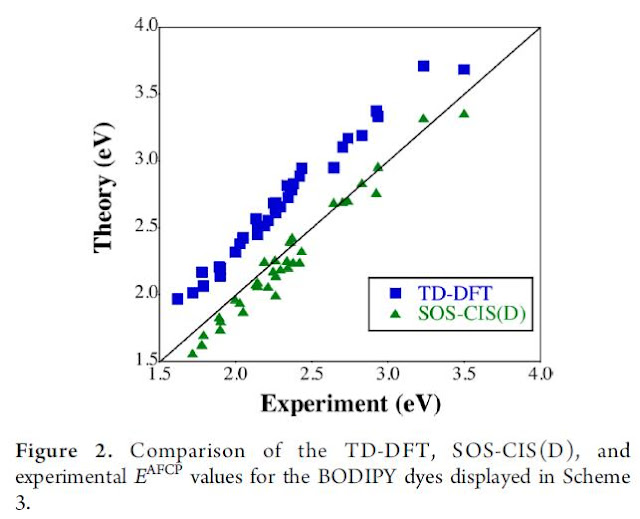 7) Here is the correlation between computed and experimental collision diameters of some molecules (mostly organic): 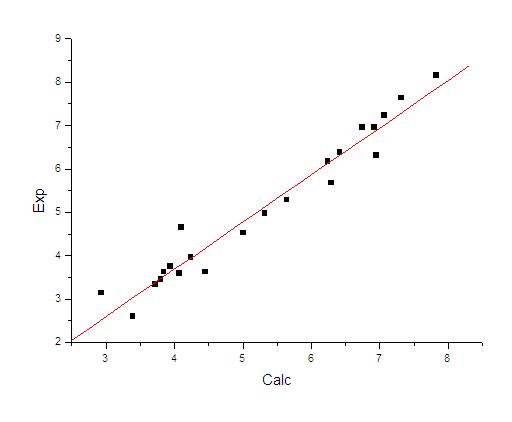 The experimental collision diameters were taken from [5,6]. The computed ones were obtained with Chemcraft: firstly the molecular geometries were obtained at B3LYP/6-31G(D,P) level (again, we don’t recommend using this method, we just don’t want to repeat the jobs with another level of theory), and then the diameters were computed by Chemcraft via “Tools/Calculate collision diameters” menu item.

8) The following graph should not be called a “correlation”, but it illustrates some practical use of quantum chemistry. The X values correspond to the anisotropy of molecular polarizability of some nematic liquid crystals (Shiff bases), the Y values correspond to the temperatures of phase transitions (nematic-isotrope). The first ones were computed with DFT, the latter (experimental values) were taken from literature: 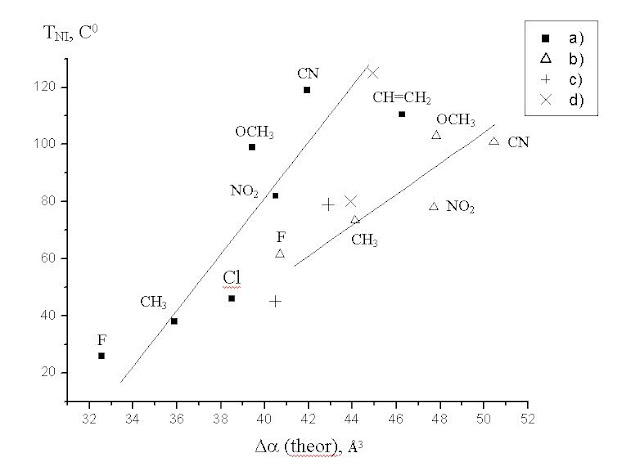 The symbols above the points represent fragments of molecules which vary among series.
This correlation is so poor not because the computation give wrong results; as it can be seen above, the computed components of molecular polarizability correlate well with experimental ones. So, the reason of such bad correlation is the imperfection of this approach (that the thermal stability of liquid crystal depends on their molecular polarizability). 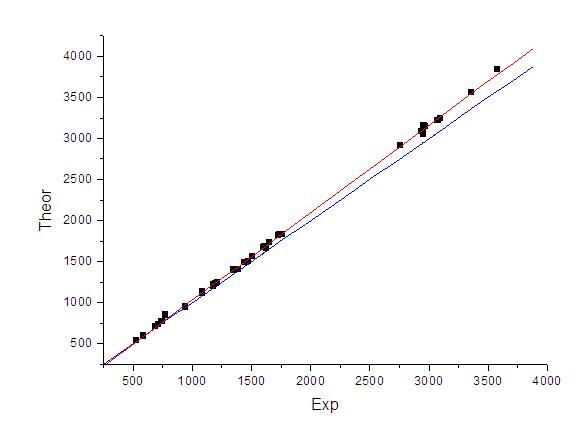 The blue line indicates full theory/experiment match. Some improper attribution of the bands is possible.
We have also computed the same frequencies at a lower level (wB97XD/6-31G(D,P)). The standard deviation turned out to be 29 cm-1 for wB97XD/6-31G(D,P) and 24 cm-1 for wB97XD/aug-cc-pVTZ. The job CPU time with the latter method was 50-100 times higher than with the former method.
When we need to interpret the experimental IR spectra, we usually compute the spectra at
wB97XD/6-31G(D,P) level of theory, and multiply the computed frequency values (X values) in Chemcraft by the coefficient of 0.958. The errors of frequencies obtained in such a way are usually not bigger than 60 cm-1.